The European approach to the government of migrations is traditionally characterized by an emphasis on the labour dimension: this is pivotal for the social acceptance of Third Country Nationals, but has been nurturing the view of a complementarity between autochthonous and foreign labour force, and thus has favoured migrants’ concentration in low-skilled and low-status jobs. At the same time, European countries – consistently with their historical focus on human rights – have formally extended an ample set of protections, rights and opportunities to foreign workers and their family members, with the result of transforming “temporary migrant workers” into “semi-citizens” (or denizens), and protecting them through strong antidiscrimination rules. The attempt to keep these two contradictory logics together – the “economicistic” logic on which the system of entry (and stay) are regulated and the logic of solidarity and equal opportunities – have generated an “historical paradox”, which inhibits the full valorisation of migrants contribution to the economic and social development of European societies (and of their sending countries).

With these premises, the presentation will introduce the aims and the general results of the project “DIVERSE – Diversity Improvement as a Viable Enrichment Resource for Society and Economy”, supported by the European Commission (Grant Agreement No. HOME/2012/EIFX/CA/CFP/4248 *30-CE-0586564/00-20), coordinated by the research centre WWELL of the Catholic University of Milan and realized in cooperation with 14 partners in 10 EU countries (Estonia, Finland, Germany, Hungary, Italy, The Netherlands, Poland, Portugal, Spain and Sweden). The overall and long-term aim of the project is to “rejuvenate” the European approach to immigration, overcoming its historical paradox through three major changes: a) shifting from the perception of migrants as contingently instrumental resources to the conception of their human capital as a structural resource for the economic and social development of European societies; b) promoting a wider awareness among different types of organisations as to the importance and potentialities of Diversity Management strategies; c) improving the social participation and the civic engagement of Third-Country Nationals (especially their participation to voluntary, non-profit organisations) for the construction of an inclusive European society and in order to change their common perception as people who need to be helped and assisted. 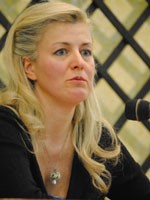 Laura Zanfrini, PhD in Sociology, Scientific Director of the project and of the WWELL research centre, Full professor at the Catholic University of Milan where she teaches “Sociology of Migrations and Interethnic relations” and “Organizations, Environment and Social Innovations”. As one of the main Italian experts of migratory processes, she is a member of various research networks and consultant of many Italian and international organisations. She has written over 250 books, essays and articles.